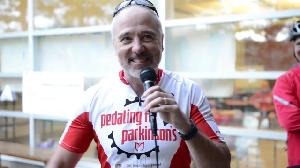 First of all, I hope everybody reading this is healthy and happy (and that goes for your family as well). Pedaling for Parkinson's in PEC has had to undergo some changes this year due to the Covid-19 pandemic. However, the one thing that hasn't changed is the Cause to end Parkinson's Disease still remains and I am asking for your help.

This year you are able to do your ride anywhere you choose, and I sincerely hope that all of you get out there on your bikes and Pedal for Parkinson Canada! I will be doing my ride in Milford (along with a few friends) on August 29th. It will be a very fun ride indeed but, make no mistake, every pedal turn will go towards making the lives of those people, like myself, live better with Parkinson's Disease.

Technically speaking, Parkinson's is a neurodegenerative disease. Movement is normally controlled by dopamine, a chemical that carries signals between the nerves in the brain. When cells that normally produce dopamine die, the symptoms of Parkinson's appear. 25 people each day are diagnosed with Parkinson's in Canada. Currently, there is no cure. That needs to change.

Because of the tremendous support of our sponsors, your donation goes directly towards a Pedaling for Parkinson's Research Grant and the Parkinson Canada National Research Program.

I truly believe that if we just keep going, we will ultimately get there. Thank you very much for your donation.