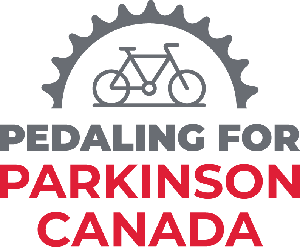 This summer I am taking part in Pedaling for Parkinson's - a cycling event that was created to raise awareness about Parkinson's and raise funds for research.

Team Captains Steve Iseman and Mike Loghrin are so happy to introduce our team.  Started in 2019, the Rigid Riders were formed to get people living with Parkinson's onto a bike saddle and start taking charge of their disease development.  Years of scientific study seems to have ascertained that vigorous cycling does cause a noticeable improvement to the physical symptoms of PD, and yet reluctance remains high.  Perhaps it's inexperience; perhaps instability, perhaps fear.  Our goal is to breakdown these barriers and help them to join the fight. Our approach is to make it fun and personal.

We are an eclectic mob which encompasses people that have an interest in cycling and a connection the Parkinson’s community. There are 50+ of us who represent a wide spectrum of bicyclists, a range of different abilities, people with Parkinson’s and people who support them.

The team grew by both word-of-mouth, chasing down people who might be interested but hadn’t ridden a bike since childhood and by rumours within the Parkinson community. Before people could object they found themselves being pushed down a driveway and on their way to a new passion. There are dedicated therapist and trainers who are part of the team and they encourage members to be safe and injury free.

Several years ago, a couple of the keener members’ uncovered research that supported the long known intuitive knowledge that cycling lessened and in some cases permanently reduced Parkinson’s symptoms. You had to ride hard and fast, but the benefits were undeniable, and thus the Rigid Riders were founded. Currently the team is actively recruiting people with little or no cycling experience to give it a try. This often involves trips by the team captain’s to the potential future riders home and lots of one-on-one support and encouragement.

The team is actively planning our post-covid calendar and are arranging rides of varying lengths and intensities. The team has been beneficiaries of generous sponsors who have provided team members very handsome team jerseys so that we now look like a team.

If you would like to know more, please check out these videos …

Thanks to the support of our sponsors, your donation dollars go directly towards a Pedaling for Parkinson’s Research Grant and the Parkinson Canada Research Program.

Parkinson's is a neurodegenerative disease. Movement is normally controlled by dopamine, a chemical that carries signals between the nerves in the brain. When cells that normally produce dopamine die, the symptoms of Parkinson's appear. Currently, there is no cure. The need is only increasing. More than 25 Canadians are diagnosed with Parkinson's every day; more than one person every hour. By 2031, the number of people living with Parkinson’s in Canada will more than double.  Your support fuels the increasing need for research to improve quality of life and ultimately find a cure.

With your support we can help Parkinson Canada realize their vision of a better life today for Canadians living with Parkinson's; a world without Parkinson's tomorrow.