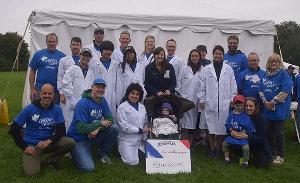 Harnessing the Power of Stem Cells to Treat Parkinson's Disease.

Thanks for visiting our team page. This September, our team will be joining everyday heroes from communities across Canada as part of Parkinson SuperWalk.

Driven by a vision to liberate patients from degenerative disease, BlueRock Therapeutics is ushering in a new era of cell-based medicines. Founded in 2016, BlueRock and its team of preeminent scientists are pioneering cell therapies that restore critical natural functions in the body, with an initial focus on severe brain and heart conditions. BlueRock’s culture is defined by the highest ethical standards and an urgency to bring transformative treatments to all who would benefit.

Our first therapeutic candidate, for Parkinson’s disease, is on track to enter the clinic in 2019. Parkinson’s is a chronic and progressive movement disorder that arises from the malfunction and death of vital nerve cells in the brain; it affects more than 6 million people worldwide. BlueRock’s approach is to restore natural dopamine production in the midbrain of Parkinson’s patients by replacing dopamine-secreting cells lost to degenerative disease.