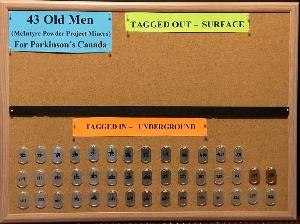 Please JOIN US as we walk for 43 Old Men in support of Parkinson Canada.

Every person has known an old man in their life that they care about.

The name of our team is to honour 43 former underground miners who were exposed to finely ground aluminum dust known as McIntyre Powder, and who later developed Parkinson’s (see our Team Captain’s personal page for more details).

Parkinson’s is not just a disease of old men. It affects women and men, young and old.
But even if Parkinson’s only affected old men, we want those men to know that we care about them. We also care about their families and want to help Parkinson Canada provide information and support to families living with Parkinson’s.

When miners go underground they use a Tag Board system to "tag in' underground and "tag out" when they are safe on surface. Our team photo shows a Tag Board for our 43 McIntyre Powder-exposed miners with Parkinson's. If 100,000 of us raise $43 ($1 for each man), it will total $4.3 million for Parkinson Canada.

Please join our team, donate, and tell us about the old men that YOU care about.
Every time we reach $100,000, we will bring one of our 43 Old Men from underground to surface to tag out, until just two are left. We will bring the last two miners up to surface together with the last $200,000 raised.

THANK YOU for caring about 43 Old Men.