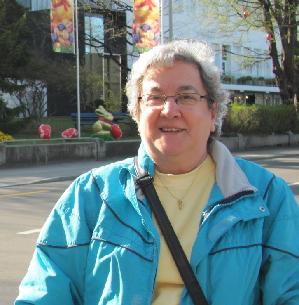 Thanks for visiting our team page. This September, our team will be joining the Parkinson community across Canada as part of Parkinson Canada SuperWalk.

As a team, we’re committed to a future without Parkinson's. I’d like to tell you why, and what walking alongside us or visiting our personal page and making a donation will do.

I've had friends afflicted with Parkinsons, but in 2016 my mother was dignosed with Parkinsonism Syndrome after several months in hospital being treated for her symtoms with no success. After an MRI, finally a neurologist diagnosed the PS as the cause of her issues. We have seen a very active grandmother and seamstress go from playing with her grandchildren and sewing, just for fun, to packing away her sewing equipment and losing all interest in the fun things in life. Looking back now, we should have seen the signs, had we been educated. The first noticable symptoms was the micrographia, or abnormally small handwriting. A woman whos penmanship was superb, it became smaller and smaller over a two-year period. Then came the bouts of uncontrollable crying and irritation. This finally resulted in her hospitalization. Her rigidity and slowness prevents her from being active as she once was, and she has an adversion to crowds now.

Help me ensure Parkinson Canada is there for my friends and family as well as Canadians living with Parkinson’s today – while funding research into better treatments and one day, a cure.