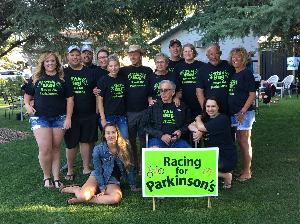 Team Molde at the 2nd Annual Pedal For Parkinsons

Thanks for visiting our team page. This July, our team will be hosting the 3rd Annual Pedal For Parkinson's to raise money for Team Molde. All the money collected will be donated to Parkinson's research during the Moose Jaw Superwalk in September.

As a team, we’re committed to a future without Parkinson's. I’d like to tell you why, and what hosting this event alongside us or visiting our personal pages and making a donation will do.

Richard Molde, a SuperWalk participant since 2016, first because involved in the event as a way to increase awareness about Parkinson’s and to raise funds for research. In 2018, he raised over $3,000 with the support of his team, “Team Molde”, and they are all planning to have another successful year in 2019.

After being diagnosed with Parkinson’s in December of 2000, Molde was told by his doctor not to “go home and sit in a chair”. Since then, Molde has done everything but that. When a support group formed in his area in 2013, he joined right away. His wife, Bev Molde says that “he is determined not to give in. Others at the group like to be around him”. For this reason and many others, Richard Molde was named the Support Group Hero – a representative for the support group chosen because of their determination to helping others. His never give up attitude is in line with this year’s campaign theme for Parkinson Canada SuperWalk ‘No Matter What’ which is meant to represent the strength of spirit and perseverance exhibited by people with Parkinson’s across the country.

Another reason for Richard Molde’s Hero title is his dedication to fundraising for the Parkinson Canada SuperWalk. In 2017, The Molde’s held their first Pedal for Parkinson event that includes a barbeque and a timed bike race. They were blown away with the success of the event and this year will mark their third year running it.

Richard and Bev Molde continue to participate in the SuperWalk, year after year, because of the experience. “Walking together has brought us closer as a family,” says Bev Molde. “The support that comes from this event is amazing.

So for the 3rd year in a row, after 2 years of success we will be hosting a fundraiser at Palliser Regional Park. We will have a BBQ, cake and timed bike races in which anyone can join if they wish. The last 2 years we have raised around $3000 for each event and we are looking to raise more this year!

We encourage you to join us on July 27th and donate beforehand or during the event.

For more information regarding the event please send an email to: kkeenleyside@chinooksd.ca

More than 25 Canadians are diagnosed with Parkinson's every day; more than one person every hour. By 2031, the number of people living with Parkinson’s in Canada will more than double. I am participating in SuperWalk to fund the increasing need for support, advocacy and research.

Your donation fuels better health outcomes for Canadians living with Parkinson's today, and it supports the Parkinson Canada Research Program which works with Canada's brightest researchers to find the next big breakthroughs in treatment. This is why I'm asking for your support today.