Support May Saveriano for Parkinson SuperWalk 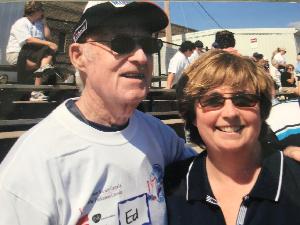 Thanks for visiting my Personal page. On Sunday, September 8th, the Gallagher family will be joining the Parkinson community across Canada as part of Parkinson Canada SuperWalk.

As a family, we’re committed to a future without Parkinson's.  I’d like to tell you why. My father, Ed Gallagher, had Parkinson's for 10 years before he passed away on September 6, 2008, a month before his 80th birthday. We used to think he had a mild form of Parkinson's because it didn't seem to impact him much until the last 6 months of his life. But it was probably because he followed all the advice he was given for living with Parksinson's, particularly about exercise.

My father was a strong supporter of Parkinson Canada. He was both a user of the support facilities and a supporter of the foundation. After driving far into Toronto for many years to attend a Parkinson's water exercise program, he helped organize a similar program at the Oakville YMCA. He also willed his brain to Parkinson's research.

My father walked in many Superwalks and his family always joined him. After he passed away we continued to participate in Superwalks in his memory whenever we could.

More than 25 Canadians are diagnosed with Parkinson's every day; more than one person every hour. I am participating in the SuperWalk to fund the increasing need for support, advocacy and research. This is why I’m asking for your support today.

My Personal Gift
I donated to myself
Personal Progress:
of Goal
$100 Raised
$250.00
Fundraising Honour Roll
May Saveriano
$100

Storyteller
I have updated my page.