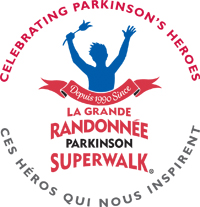 It’s that time of year again. The Parkinson Superwalk is going to look different this year for many reasons, but the biggest one for me and my family is that my dad will be missing. Instead, we will be walking In Memory of the PD Gardener.

Dad was a massive and enthusiastic supporter of Parkinson Canada. He benefitted from the support groups and many friends he made. When he was facing a major surgery, Parkinson Canada even arranged for him to meet with someone with Parkinson’s who had been through a similar surgery to discuss how it might affect his experience.
Dad was an advocate for people with Parkinson’s and was committed to educating people about how Parkinson’s is not just tremor. I also know Dad held out hope that someday there will be a cure for Parkinson’s disease, a disease that takes so much away from people.
Parkinson Canada works towards all these goals: support, advocacy, and research. But they need financial support in order to do the great work they do. If you’re in a position to be able to donate to this charity, it would mean a lot to me.
Thanks and hope everyone is keeping safe and well.
Kristen
View More
DONATE NOW
Visit Team: In memory of The PD Gardener
Achievements