Support Alex in the Parkinson Superwalk 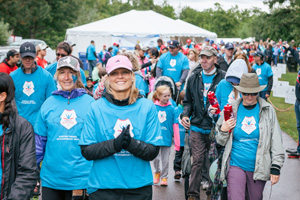 As most of you know, my dad Timothy had Parkinson's disease. He never managed to let it stop him from doing what he wanted to do. Sometimes it meant he struggled more than he liked or he had to trade in his mountain bike for a motorized trike. But he continued to do what made him happy despite the changes caused by Parkinsons. He was a big supporter of the Parkinson's society and regularly participated in the Parkinson's Superwalk.

In memory of my Dad, Edward and I will be walking in the Parkinson Superwalk this year.

I’d like to tell you why, and what your donation will do.

By 2031, the number of people living with Parkinson’s in Canada will more than double. I am participating in Parkinson SuperWalk to fund the increasing need for support services, education, advocacy and research. This is why I’m asking for your support today.