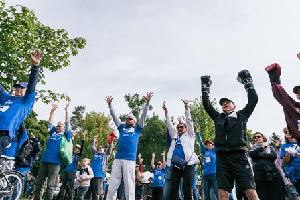 Hi my name is Pauline and I have been involved with the Superwalk for 7 years now.

My father had Parkinson and he passed away in March, 2013.

He use to say "how come they come to your house and collect for different causes  but no one ever collects for Parkinson". So when Dad passed away I was determined to find someone who could put me in the right direction to help raise awareness for Parkinson. I didn't know that the Superwalk existed until I talked to Jim in Halifax. We talked about my Dad and about the walk and what it means and where the fund raised goes. He gave me the information to call the PEI Chapter and I got in touch with Dan Steele.

Dan has been a tremendous help to me and still is 7 years later. He has been the M.C at every walk I've hosted and he always honors my Dad at every one.

My Dad was diagnosed in 2000. He didn't have tremors that you could see as he felt them from the inside. I watched my Dad struggle as the years went by and eventually he had to use a walker to help get around and he had a lift chair to help him stand up. It was so sad to watch a very independent man go from doing everything for himself and others to having people do everything for him.

He had his good days and his bad days but he always tried to stay positive. I remember he was be walking and all at once he would freeze in place and his feet would move but his body wouldn't. I use to come up behind him and sing that song Getty up go Daddy, getty up go... he would laugh and start to walk again.

I held my first walk in September, 2013 and it was a very emotional one.

I know because of Covid-19 I will not even come close to that this year.

There are so many people living with Parkinson that need your support. Please help us to raise awareness. Any donation would be greatly appreciated.

Storyteller
I have updated my page.
Getting Started
Received first donation