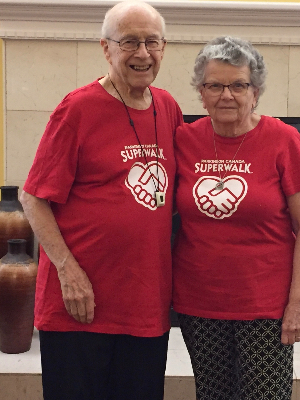 Since Gail doesn't 'do' computers, Allan is setting up her page for her.

As Gail and Allan are working as a team I am putting the same letter appealing for your support for this year's SuperWalk:

Somebody once asked me to explain why I do this. I have two basic reasons:
1) I was first informed that I had the early symptoms of Parkinson's Disease(PD) in July 2009
2) I wish to find a cure and support for others who also suffer with PD presently or will in the future.
My first walk was in 2015 after I had been introduced to the PD support group by a fellow parishioner of All Saints, Westboro, Susan, whose husband Ken had lived with PD for thirty years. I refer to them as my PD mentors. Unfortuntely, Ken died two years ago. But Susan and her family continue to be close friends to date. They brought Gail and myself into the PD Support Group that meets once a month (until the interuption by Covid-19). These meetings also give our spouses the opportunity to meet separately to share their concerns about living with somebody who has the disabities of PD. Likewise, we were attending a PD exercise group sponsored by The Ottawa School of Dance.Through these groups we have met numerous people with varying stages and symptoms of PD - not all have obvious signs such as Michael J Fox's severe tremors. Once we meet in groups we see minor tremors, what is referred to as frozen facial features, memory problems, fluctuation of blood pressure and, as I have, difficulty with handwriting (cursive letters get smaller and smaller). I have learned to steady my hand on the table and use block letters. I have been able to pass this on to others in group sessions, just as others pass on tips for other problems. So this is one of the important reasons for supporting the SuperWalks.
But another reason for supporting the walk is the research funding that is needed to find a cure for PD. As a neurological disease, there are ongoing studies into such ideas as brain stimulation, etc., which need to be financed.
This year's walk was my sixth and the second since I have asked for support from the residents of the senior residence which we now call home.. Gail and I are pleased with the support we have received from them as well as the parishoners of All Saints,Westboro and,ofcourse, our extended family and friends. We have found that in this time we have met a number of the residents here who either have PD or someone in their families who have or had PD. So this is another good reason to share in the SuperWalk and to seek support for it.

Allan on behalf of Gail

Storyteller
I have updated my page.
Getting Started
Received first donation