Ralph Richardson's 300 And Beyond! 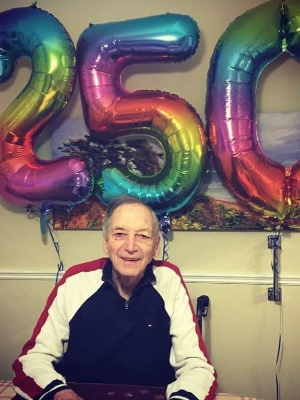 The Man, The Legend! Ralph

First, a little bit about Ralph and his battle with Parkinson's and the amazing success his 100 Day Driveway Walk was. It was one of the good news stories of the pandemic in 2020, and we hope to continue walking, inspiring, and raising money to find better treatments and hopefully a cure for Parkinson's.

Five years ago, Ralph was diagnosed with Lewy Body Dementia, and then Parkinson’s Disease just a few years later.  Living with Parkinson’s is a constant struggle, but through it all, he has never lost his determination.

Already limited in his activities, when the coronavirus crisis began Ralph’s movement was restricted to home. Even though he couldn’t get out to his usual programs,  he was determined to keep on moving. Out of this determination, his driveway walk was born.

Ralph decided to start walking laps of his driveway.  He set his mind to doing 30 laps and on that first day, he walked his first 8.5. By day 17 he had reached his goal. But he didn’t stop walking.

Ralph with his dear wife Berys at his side completed his mission to walk 100 days for Parkinson’s and raised over 30k, which was 20k over his original goal, and has continued to walk in his driveway throughtout the winter, though not as much. He is now doing other strength building exercises on some days.

During his 100 Day Walk, Ralph was named the 2020 Superwalk National Hero, Tim and Sid Good News All-Star, and CTV's Atlantic- Maritimer of the Month. His other sidekick and fundraiser coordinator, Greg Hicks was recognized by Parkinson Canada-Atlantic as a MVP Volunteer.

This year Team Ralph is in a little different position with Ralph not walking daily, and has had his ups and downs over the last few months. Though as the weather has improved, Ralph has found some new life. This week he once again persevered and walked an amazing 20 laps, the first time he has done that since last summer. Ralph is now approaching 300 Days of Driveway walking, so this year we are calling our campaign 300 And Beyond. We will be raising funds from now until September when the actual Superwalk event takes place.

We will be giving updates on Ralph as he continues on his March to 300 and beyond. This year we are opening up Team Ralph to invite those who do not have a team to join with us and help Ralph raise funds and provide inspiration and awareness for Parkinson's. Ralph and Greg are both PD Avengers and want to continue our advocacy to find a cure for this horrible disease. We are also hoping that those who join Ralph's team or just want to support Ralph to share videos and pictures of their walking, running, biking, and provide a place of inspiration for everybody, whether they are battling Parkinson's or not. Updates will be provided on both Facebook and Twitter again this year as Team Ralph continues on. We are not sure what to expect this year, as we do not want to have as much media coverage this year. Though we will start and see where it goes from here!

Please feel free to donate to Ralph's fight as we will continue to raise funds to fight this disease.

Thank you all so much for supporting Ralph’s 100 days for Parkinson’s last year, and for joining him on this important journey.  Be sure to follow updates on  Facebook and Twitter as there will be occasional updates, and good news stories, and other Parkinson related information. Stay tuned for updates, as more will be coming soon!