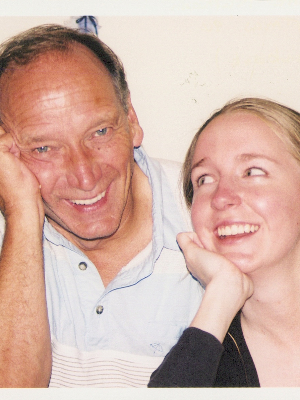 My dad has always been my hero. He's an incredible father and leader, and the strongest man I know. And so many of my early memories of my dad are centered around walking. I remember as a little girl begging him to take me on his morning walk to Tim Hortons and him telling me I could come along, but I had to keep up. I'd rush along by his side, taking two steps for everyone of his strides, both of us so happy for the company.

About six years ago he was diagnosed with Lewy Body Dementia, and then Parkinson’s Disease just a few years later.

Living with Parkinson’s has been a constant struggle, but through it all, he has never lost his determination.

Already limited in his activities, when the coronavirus pandemic started, his movement was restricted to home. Even though he couldn’t get out to his usual programs,  he was determined to keep on moving. So he started walking laps of our driveway.

Over the past few months, parkinson's has continued to take more and more from him. Since he won't always be able to do the walk himself, this year I'll be joining 'team Ralph' and walking on his behalf.

If you'd like to support team Ralph, we'd love the support. Every dollar means new hope for people living with Parkinson's disease. Thank you.